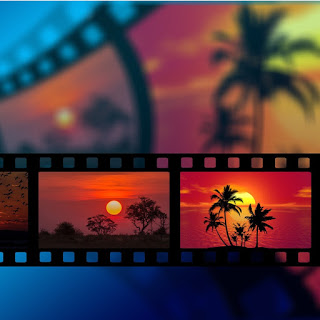 A picture is worth a thousand words is
an English saying that is familiar to all of us.  Wikipedia describes this saying as referring
“to the notion that a complex idea
can be conveyed with just a single still image or that an image of a subject conveys its meaning or essence more
effectively than a description does.”  Unfortunately,
no one seems to know for sure where or when this phrase originated, but what is
certain is that it undoubtedly rings true for all of us, especially in the world
language classroom!  In fact, research now backs up what we have long suspected… that teaching with images is very effective! 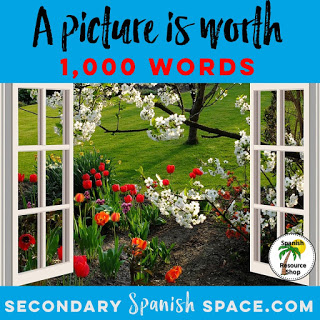 So, what can be done
with a picture, you might ask?  Well, I’m
here to tell you that a LOT can be done.  I
recently stumbled onto an article published by a gentleman by the name
of Harry Grover Tuttle in which he lists 50 ways to use images in the foreign
language classroom.  I was blown away by
how many uses he came up with, and I’m sure you will be too!  So sit back, grab a pencil and prepare to jot
down a few ideas that you can easily incorporate into your class tomorrow! 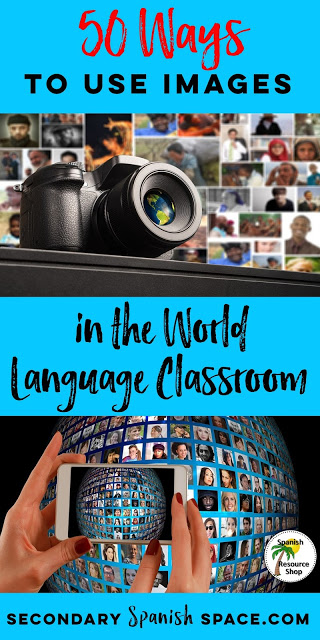 1) One student orally describes a picture for one
minute to his partner.

2) One student describes a picture
orally to a partner who then repeats the description, using the picture as an
aid for recall.

3) One student orally describes
the picture to another student who does not see it; the second student then
repeats the description to the first student.

4) Two students look at a picture;
then one student looks away while the other student asks him questions about
it.

5) Two students look at the
picture and compete to see who can make up more questions about it.

6) Two students make up questions
about a picture; one student uses question words, the other does not use
question words. A continuation of this exercise would be to have the students
answer each other’s questions orally or in writing.

7) One student orally describes a
picture to a second student who then draws a copy of it.

8) One student orally describes a
picture to another student who then is given a choice of pictures and must
choose the one described.

9) Two students tell a story using
a picture. One student tells what happened before the scene in the picture and
the other tells what will happen afterward.

10) While one student orally
describes a picture, the other student changes descriptive statements to
questions.

11) While one student orally
describes what is happening in a picture, the other student says the same thing
in a different tense or in the negative.

12) While one student orally
describes a picture, the other paraphrases what the first student is saying. 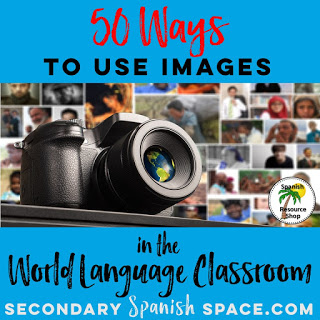 13) While one student orally
describes a picture, the other repeats the same thing but changes all subjects
to the plural or singular and makes all other necessary grammatical changes.

14) Two students look at a picture
and one acts the angel conscience and the other the devil conscience to debate
what the person in the picture should do in a certain situation.

17) Two students look at the same
picture and as one describes the picture the other says the exact opposite,
i.e., “the chair is big” will be changed to “the chair is small.”

18) Two students look at the same
picture and supply the dialogue for the people represented. (If there are more
than two characters in the picture, group students accordingly.)

19) Two students look at the same
picture and act out what is happening in the picture as they are describing it.

20) Two students look at the same
picture and each pretends to be an object in the picture. The two objects then
talk to each other.

21) One student selects an object
in the picture and tries to sell it to the other student.

22) One student tells the other
student all the colors in the picture and the second student tells what objects
have those colors.

23) One student tells the other
student what he would do in the shown situation. The other student then tells
what he would do. At a more advanced level the second student might use a
different verb construction such as “should have.”

24) After selecting a picture, a
student chooses a letter of the alphabet and then names as many objects as
possible in the picture that begin with that letter. The student who names the
most in one minute wins. 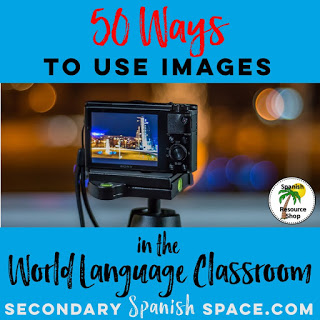 29) Two students look at the same
picture; the first student tells what mood he feels is represented in the
picture. The second student tells him whether he agrees with him and why.

30) Two students look at the same
picture; the first student tells the other about a similar experience in his
own life. The second student then tells in what way the first person’s
experience is similar to the original picture.

32) One student is given two
pictures by his partner. The first student makes up a story about the two
pictures. The second student uses the pictures in a different order to tell a
different story.

33) One student is given two
pictures by his partner. The first student chooses an object in one picture to
put in the second picture and tells how the new object would change the
picture. The second student does the same thing with a different object.

35) A student writes out a
description of a picture and then omits at least one word per sentence which he
puts at the bottom of the page. The other student then replaces the omitted
words in the paragraph.

36) The first student describes
the home and the family of the person in the picture. The second student tells
how the described home and family is similar or different from his own.

37) A student selects a picture
and tells what the person’s favorite sports or hobbies are, where he does them,
and how he does them. 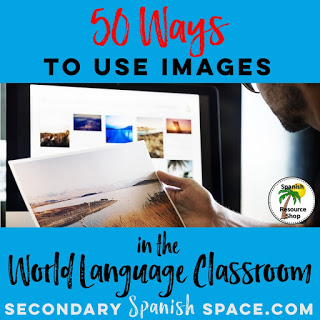 38) A student writes a letter of
about ten sentences telling a friend about the picture, pretending it is a
tourist site, a vacation trip, historical incident, or a news story.

40) One student tells another
student how he would make his picture into a TV program or movie. The second
student tells what he thinks about this program.

41) One student makes up a mystery
story about the picture. Another student tries to solve the mystery by creating
a possible solution.

42) One student gives another
student a picture and specifies a mood. The second student then writes at least
five sentences about the picture reflecting that mood. The first student then
makes as few changes as possible on the written description to change it to a
different mood which the second student suggests.

44) Each of the two students lists
as many vocabulary words as possible from a given picture. The student who
writes down the most words wins.

46) Given a vowel or consonant
sound, the students say all the words, objects, actions, etc., in the picture
which contain that sound.

47) One student makes a statement
about the picture. The second student repeats the statement and adds to it by
using a conjunction such as but or since.

48) Two students see how many
different ways they can rearrange three pictures to tell different stories.

49) One student looks at a picture
and tells how it is similar to his house, community, etc. The second student
tells how it differs.

50) In turn, each of the two
students selects a picture and tells why the other should visit the place or do
the activity illustrated in the picture. A third student will decide who wins
and explain why.
Whew!
T-H-A-N-K  Y-O-U, Harry!  I’m sure there are a few ideas listed here that perhaps you hadn’t ever thought of… I know that was true for
me!  And once you
start using images, you might even think of a few more ideas not listed here!  There are endless ways that you can incorporate an image into your
class! 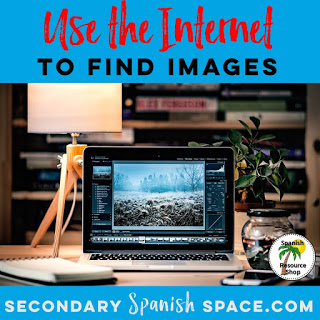 But how do you get the images?  Well, the most obvious answer is to find them
on the internet.  Do a search for a
related topic that you are studying (house, family, etc.) and simply archive
all of those wonderful pictures into a digital file for later.  But… have you ever considered having your
students bring in pictures?  This is a
wonderful way to bring even more meaning to the language because the language
gets personal when personal images are used!
You could even have the students take pictures around campus with a
digital camera and upload them to a class file to be used throughout the semester!  And then there’s the option of you… yes, you…
bringing in personal pictures.  Students
love to get sneak peeks into your private life (you and your dog at the park,
your family at Disney World, etc.)  There
are so many options!  *Of course, you
should always use discretion when sharing personal images. 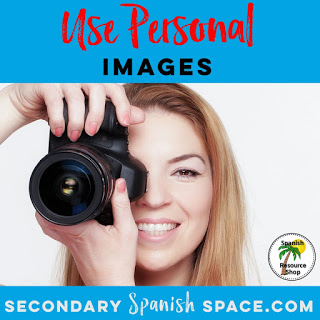 Now, what are you waiting for???  Grab an idea from the list above and an image
from Google and get going!  Let me know
in the comments below how your activity turned out or if you have another idea
to add to the list! 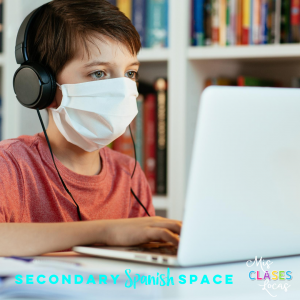 Spanish Class Distance Learning – How to start the year online 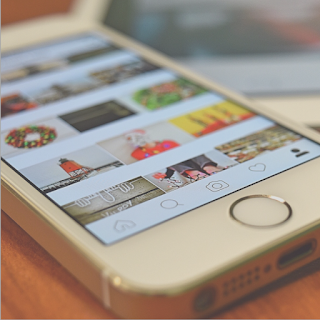 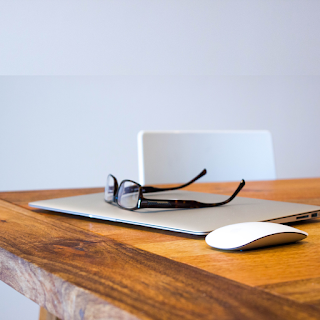 The Big List of Technology Resources for Spanish Class

We share a love of Spanish language and culture and are passionate about helping students, sharing ideas with teachers, and creating engaging resources.

Our beloved Allison has a new IG account for all t

Congratulations to all our winners! Bummed you did

If you need any FREE resources to get you through

Get excited! @laprofeplotts has a new blog post wi

Head over to www.laprofeplotts.com for a super fun

There has been a problem with your Instagram Feed.