Surely I’m not the only teacher who has doggedly plowed ahead in a lesson, determined to squeeze in every second of teaching/input/ practice I possibly can, ignoring the fact that my students’ eyes are totally glazed over.

Time is a huge factor in the language classroom. Even more important is quality time with our students. Fifty minutes of focused students is better than fifty-five minutes of tired students, and a quick brain break can make that less-is-more difference. Even my very motivated students need a regular break to regroup and then get back to work!

So what makes a good brain break for the language classroom? I think the good ones:

Here are my favorites I’ve collected over the past few years! All examples are in English, just in case any non-Spanish teacher are looking for ideas as well.

Write a question on a topic the students know well in the TL on the board. What do you like to do?, for example. Then, list or brainstorm 4-6 answers (depends on your class size). I like to: listen to music, read, travel, etc. The
students have to silently pick their preferred answer. Then, everyone stands up
and walks around asking the questions and finding people with the same
answer. Everyone with the same answer has to be in the same blob (group of people), until the whole room is sorted into blobs. To stretch it out, erase and replace the answers with other options.

This is especially fun/entertaining if you pose it as a “would you rather” sort of situation, or all undesirable choices. If you had to eat ____  for breakfast the rest of your life, what would it be?

2. Find Something, Touch Something 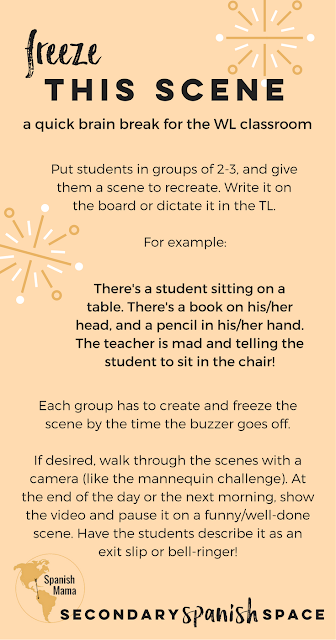 3. Freeze This Scene (The Mannequin Challenge)

Put students in groups of 2-3, and write a scene on the board using vocabulary they know. Each group reads the scene or listens to it, and recreates it by a certain time limit, freezing when the timer goes off. There’s a student sitting on a table. There is a book on his/her head. There is a pencil in his/her hand.

Or, There is a mother and her daughter. The mom is mad because the daughter got an F on her test. The daughter is making up an excuse.

It would be fun to grab a camera once everyone is frozen and tour the scenes, like the Mannequin challenge. Show at the end of class or the next day, and pause on a particularly good scene. The students can describe it in the TL as an exit slip or a bell-ringer.

(Note: the recent popularity of the mannequin challenge inspired this idea for me, but later I came across a very similar idea on Martina Bex’s site. Apparently several other have thought of this as well, so click on her name to see her and their takes on it!)

Use music as a brain break as Allison suggests. Pick a song they love of course, so it’s a true brain “break.” Señor Wooly videos are perfect for this, or a catchy authentic song (find a long list of good ones here).

Designate “Love it” and “Hate it” on opposite sides of the room, with “Like it” somewhere in the middle. Just call out any word they know, and they express their opinion by moving to one side of the room or the other side. It could be anything: food, hobbies, places, verbs. Mine usually take this one seriously because they don’t want to be caught saying they love something they really don’t. Advanced classes can be told an entire scenario, and beginners can just get a single word. 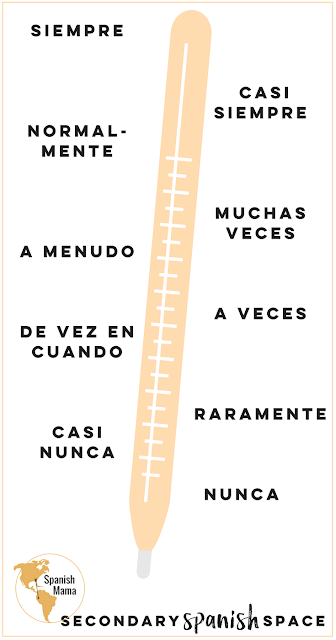 This is similar to Love it/Hate it above. Students start by standing, and listen for a term or scenario. Then they change their position to indicate if it’s true for them on a scale. Crouching down indicates a 1, and standing up with arms stretched up indicates a 10. This is adaptable to many things, and is best if you post the words on a scale in the TL. For example:

Frequency (1- never, 2- almost never, 5- sometimes, 7- often, 10- always, etc.): How often do you eat vegetables? How often do you hit the snooze bar on your alarm clock, instead of getting up right away?

Get everyone moving with some Total Physical Response, or just plain acting out directions. Of course, since it’s a brain break, make it funny: Put your foot on your head. Sing in the shower. You could turn it into a game like Simon Says as well.

Have students sit or stand in a circle. The group will count to 100,
going around the around and taking turns saying the numbers. The goal of
the game is to stay in the circle, to 100, without getting out. If it’s
your turn and you have to say a 10’s number, you are out. The trick is
that students can choose to say one, two, or three numbers. If the
person before ended on six, they could say seven, or seven-eight, or seven-eight-nine as part of their turn to try to get the next person out. The last student standing wins.


Have everyone stand in a circle. Call out a certain characteristic, and everyone to whom it applies must leave their spot and run to another one. For example, call out Everyone wearing white shoes! or Anyone born in December! (Credit: Minds in Bloom)

Put up a picture in each corner of the room. (You’ll want to already have these ready). One student stands at the front of the room and calls out a word. Whoever is in the corner with the matching picture is out. Continue play until everyone is back in their seats. 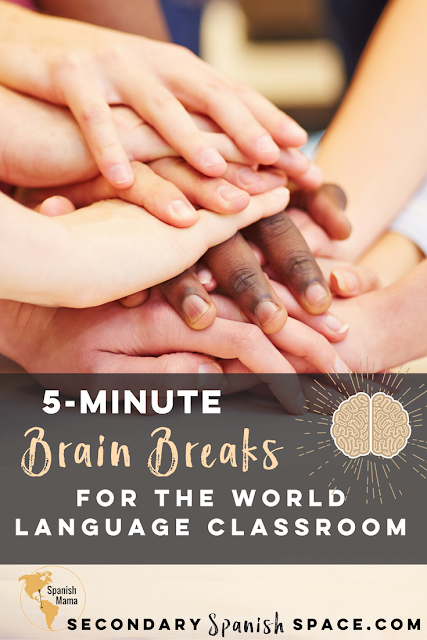 Hope these are helpful to you! You can find more brain breaks at Musicuentos and Mis Clases Locas.

I have more game lists as well!:

Number 3 was a big hit! We ended up making it a new activity to work with the vocabulary. I gave a chocolate to the most expressive group. Thanks for sharing!

These are FANTASTIC! Thanks for sharing!

Elisabeth I love reading your blog. I teach American Sign Language and can&#39;t wait to tweak your ideas in my classroom. I would love for you to share your ideas on my blog creativeaslteaching.com

I am big with videos. I use some of Señor Wooly&#39;s, but I will also use a pop music video, if it&#39;s appropriate for class, and I will find conversational videos in Spanish that meet the level of my students. I also have them do some TPR, but I find that my kids respond best videos.